A professor of bassoon and music theory, he began his career at Texas Tech in 1965. 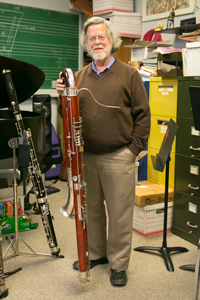 Richard Meek was first introduced to Texas Technological College as an Ohio high school student in the 1950s.

“One of our trigonometry texts was authored by one of Texas Technological College’s professors. It had the finest logarithmic tables at the back of the book,” Meek said. “Then in 1964, my three brothers and I took a trip out west. We came down through Lubbock on the way to Carlsbad Caverns.”

He didn’t know it at the time, but the following year, he would begin his teaching career at the College, now Texas Tech University. Today, Meek will be honored for 50 years of service with the university.

As a professor of bassoon and music theory since 1965, Meek said the best part about working at the university has been the people, students, faculty and staff he calls family.

“We want to make music together. So it’s always been friendly and very cooperative,” Meek said. “There’s always a weaker link in your group and what you do is work to help them look good and do well. That’s what a good musician does, and I’ve had my share where they help me.”

Colleagues say that spirit of helping is especially evident in Meek’s work. He doesn’t hesitate to help his students succeed, going as far as lending his own instruments for their use.

“His bassoon students were always very grateful for what they learned from him,” said Jane Ann Wilson, associate professor emeritus of music. “I think they have great respect for him and feel they learned a great deal from him.”

Meek said he’s kept in touch with many of the students he’s taught throughout the years, even teaching some of their children and grandchildren. Many have gone on to excel not just in music, but as professionals in law, medicine and finance, among others. Meek said the work that goes into creating music is a lot more than people sometimes expect, but it can pay off in unexpected ways.

“It can be a prelude to any other career that you want,” he said.

Wilson said Meek was never hesitant to share his knowledge with other teachers in the department.

“He’s really quite brilliant,” Wilson said. “More than once, I went to him with a question about analysis because I’ve always tried to help my students understand the harmony of the music they were playing.”

That knowledge comes from a life of music that began when he was just 5 years old. He got his start not with the bassoon, but with the violin.

“My granddad, who was a surgeon, his hobby was making violins, so he made a violin for every one of his children and grandchildren,” Meek said.

As he learned, Meek joined his musically-inclined mother, father and five siblings in family concerts performed in their community. Meek said he would attend commencement ceremonies at the Oberlin Conservatory of Music and hear his parents play with the commencement band. In fifth grade, he was at one of these performances when he noticed an instrument that stuck up like a baseball bat – it was the bassoon. He decided then that was the instrument he wanted to play. 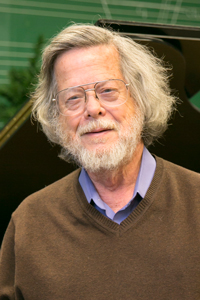 The only problem was his school band did not have a bassoon. Instead, he was given the clarinet. It wasn’t until he got to high school that he was able to pick up the bassoon. He says he never looked back.

Meek later returned to the Oberlin Observatory and obtained his bachelor’s degree in music. He earned a certificate from the Mozarteum Salzburg, Austria and also earned the Performer’s Certificate and a master of arts from the Eastman School of Music in Rochester, New York.

At Texas Tech, he is a member of the Obietech trio, the Texas Baroque Trio and the Devienne Trio. The latter trio includes Wilson on piano and Michael Stoune, associate director for graduate curriculum in the School of Music, on flute. While they most recently performed last week, they have completed numerous performances locally and abroad.

“We’ve had some great experiences playing,” Wilson said. “Our trio played at the International Double Reed conference in Buenos Aires one year. We had three short tours in Chile. It was really quite a neat experience because we got to see so much of the country and in some places where we played, they would have us teach.”

Meek also served as treasurer of the International Double Reed Society and as host for its first International Gillet Competition held at Texas Tech in 1981. He serves as editor for solo and ensemble works for the bassoon with Allyn Publications and supervises bassoonists at the annual Texas Tech Band and Orchestra Camp.

As part of the Texas Tech Faculty Senate, he was the first member to serve as president for two consecutive terms and has served in several other positions.

“He gave a tremendous amount to the university through his work with the Faculty Senate,” Wilson said. “Richard has never done anything in a small way. If he got interested in doing something, he did far more than was required always.”

Meek was recently elected for another three-year term to the Senate. He said he plans to keep on investing in Texas Tech and playing music just as he has the past 50 years.

“There’s still a great joy to making music,” Meek said. “As long as I can play something, I’m going to enjoy it.”